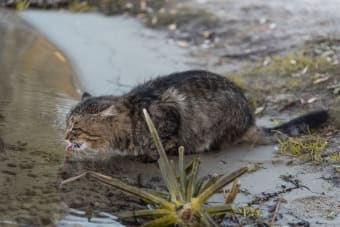 Giardiasis is an infection caused by the Giardia parasite that can affect dogs, cats, and humans. Today, our Capitola vets explain what Giardia is, how it spreads, and how it is treated.

What is cat Giardia?

Giardiasis is an intestinal infection that can affect both people and animals that is caused by the Giardia parasite. There are at least 8 different genotypes of the parasite, labeled A through H. Dogs are most commonly infected with types C and D, cats with type F, and humans with A and B.

The disease is not usually life-threatening for cats but can cause more serious illness in kittens, older cats, or cats that are immunocompromised, such as cats that have Feline Immunodeficiency Virus (FIV) or Feline Leukemia Virus (FeLV).

What are the signs of Giardia infection in cats?

The main symptom of a giardiasis infection in cats is diarrhea.

A Giardia infection in cats can lead to weight loss, chronic diarrhea, and fatty stool that contains excess mucus. Often an infected cat's poop will have a greenish tinge and it will occasionally contain blood. Vomiting and low energy may also be present in cats with giardiasis.

Many cats will be carriers of Giardia but remain asymptomatic. This means they will never exhibit symptoms of the illness but can still pass it on to other cats, and in rare cases, humans.

How are cats infected with Giardia?

The Giardia organism has two forms. The first form is a fragile, feeding form that exists in the gut of infected animals. The second form is a hard, cystic form that is shed in feces and can survive several months in the environment, particularly in water and damp, cool environments.

A cat becomes infected with Giardia after swallowing the cyst stage of the parasite. Once inside the cat's intestine, the cyst goes through a transformation to the feeding form of the organism and attaches to the intestinal wall to feed. If sufficient numbers are present, clinical signs of damage to the intestinal wall will develop.

Eventually, the cat passes infectious cysts in its stool. The time it takes from ingestion of cysts to passage in feces is 5 to 12 days in dogs and 5 to 16 days in cats. These cysts are immediately able to infect another animal. Giardiasis can be transmitted by eating or sniffing the cysts from contaminated ground, or by drinking contaminated water.

Can you get giardia from your cat?

On occasion, humans can be infected with type F giardiasis, so cat to human transmission, although extremely rare, is possible. Giardiasis is known as "beaver fever" in humans.

Immunocompromised people, such as people with HIV or cancer, should avoid cleaning the litter box of a cat with a known giardiasis infection if possible.

How is Giardia treated?

If your cat is diagnosed with giardiasis, they will most likely be prescribed a round of anti-parasitic medication that they will have to take orally for 5-7 days.

All pets diagnosed with Giardia should be re-tested two to four weeks after completion of treatment.

How do I prevent my cat from getting re-infected, or getting my other pets sick, during treatment?

Giardia cysts are infective immediately when passed into the environment, making reinfection highly possible.  Your cat's feces should be removed from the litter box quickly and disposed of and they should not share a litter box with any other cats in your household.

You should inform your vet if you have other animals in the house, even if they are not showing any symptoms. Your vet may want to start your other animals on medication as giardiasis is often asymptomatic and other pets could still be spreading the illness.

All household animals should be bathed regularly to remove cysts from the hair coat. You should also be sure to disinfect your pets' environment (crates, beds, etc.) and wash their water and food bowls daily.

Cleaning should take place until at least a few days after all pets in the household have completed their medication.

Note: The advice provided in this post is intended for informational purposes and does not constitute medical advice regarding pets. For an accurate diagnosis of your pet's condition, please make an appointment with your vet.

Is your cat exhibiting signs of giardiasis? Contact our Capitola vets today to book an appointment.

Santa Cruz Veterinary Hospital is accepting new patients! Our experienced vets are passionate about the health of Capitola companion animals. Get in touch today to book your pet's first appointment.